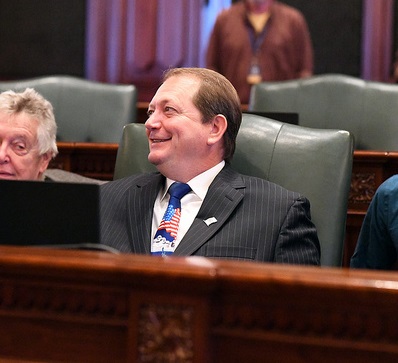 In one of his first actions since taking office, State Representative Tom Weber (R-Lake Villa) declined the state pension provided to members of the Illinois General Assembly. A small business owner and fiscal conservative, Weber said his decision reflects a personal commitment to fiscal discipline and his conviction that being entrusted as an elected official should be a public service and not an incentive for personal financial gain.

“We have a pension crisis in Illinois and those elected to solve the state’s financial problems shouldn’t be adding to the strain already placed on overstretched taxpayers,” said Weber. “My experience as a small business owner has taught me how important is to operate within your means and Illinois needs to learn the same.”

Weber’s decision to reject the pension is final and irrevocable. Administrative rules within the state pension system do not allow a legislator to opt back into the system. In 2017, the average legislative pension was $61,808 annually, up from $47,061 in 2008, an increase of nearly $15,000 in less than a decade.

“Considering the state estimates the pension debt at more than $130 billion for the five pension systems, and some outside estimates put that figure even higher, I don’t believe any new members of the General Assembly should be entering the pension system,” said Weber. “I’m glad I won’t be adding to the problem.”

Weber, a life-long resident of the Lake Villa area, is a small business owner and prior to being elected to the Illinois General Assembly served on the Lake County Board and Forest Preserve Board since 2012. He and his wife have two adult children.

The 64th House District is split between Lake and McHenry Counties, from Crystal Lake in the south and stretching northeasterly to cover the communities throughout the Chain O’Lakes up to the Wisconsin border.