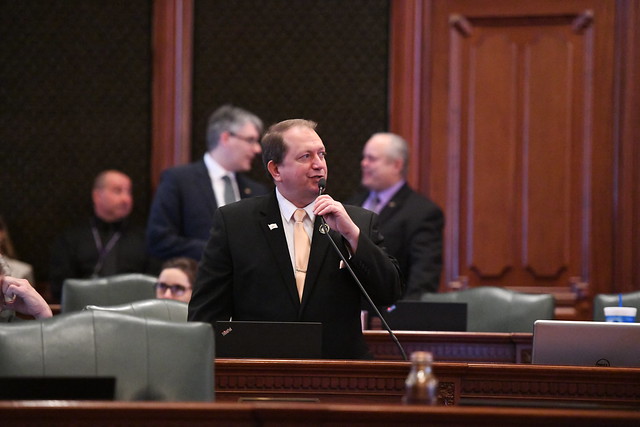 Legislation sponsored by State Representative Tom Weber (R-Lake Villa) to close a gap in county government unanimously passed the Illinois House of Representatives today. House Bill 3593 creates a removal and replacement process for the chair of a county board in counties where the chair of the board is chosen by fellow board members.

“When the chair of a county board is unable, or unwilling, to fulfill their responsibilities, but does not resign the position, the ability of county government to effectively operate is seriously harmed,” said Weber. “This is a disservice to not only that county and its elected board, but the taxpayers. Through this bill, we are creating a process to ensure counties will have the means to remove and replace the board chair in the event of a unique situation that makes it necessary to do so.”

A unique situation occurred to the Lake County Board in 2018, where Weber served prior to joining the General Assembly. In July of 2018, the chair of the board at the time went on a temporary leave of absence, which soon became permanent, but never resigned from his seat on the board or his position as board chair. It placed a unique strain on the board because the board chair is a full-time position, but the other board positions are only part-time, including that of vice-chair, whom had to assume the full responsibilities of board chair until the term ended in December.

“It’s somewhat surprising a process like this doesn’t already exist, which is why this legislation is so important,” said Weber. “This is not a Republican or a Democrat issue, this is a good government issue. I’m glad it passed the House unanimously and hope it receives the same support in the Senate.”

Weber said the threshold of four-fifths to remove a board chair is to ensure this process cannot be used for partisan means, but only in rare and unique instances when the board must act to ensure the effectiveness of government. He also reiterated that the bill only applies to counties where the chair is elected by fellow board members and not counties where the chair of the board is popularly elected by voters. Under that county government structure, he said it should be up to the voters who elected the chair originally.