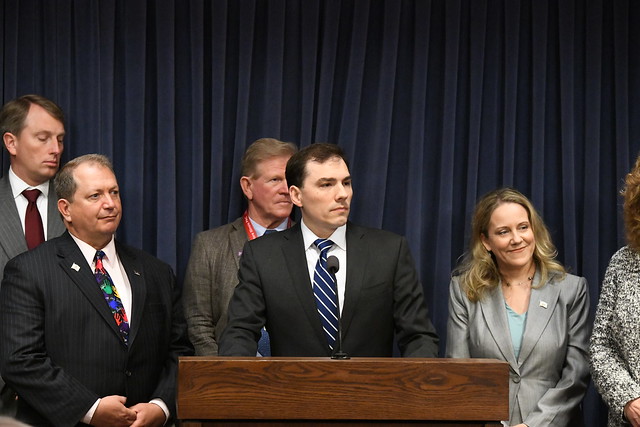 Yesterday, State Representative Tom Weber (R-Lake Villa) joined House colleagues at a press conference to unveil House Joint Resolution Constitutional Amendment 34 (HJRCA 34). HJRCA 34 would amend the Illinois Constitution to require a two-thirds vote by both chambers of the General Assembly to approve any tax increase or to impose a new tax.

Weber has been a steadfast opponent of Gov. J.B. Pritzker’s push for a graduated income tax and said HJRCA 34 is necessary to protect Illinois residents from perpetual tax rate increases. State Senate Democrats have passed a graduated tax rate structure that purportedly increases taxes on only high-income earners, but that rate structure is not guaranteed. While a supermajority is required to change the constitution to allow for a graduated tax structure, only a simple majority of lawmakers would have to agree to increase tax rates in the future. Weber expressed concern that this amounts to a bait-and-switch that will lead to higher taxes on middle class families and small businesses.

“The number one job of government is to ensure we are all treated fairly under the law,” said Weber. “We have this fairness protection right now under the constitutionally mandated flat tax requirement. This mandate provides a safeguard against drastic income tax increases because it forces lawmakers to consider economic and spending realities before simply raising taxes on everyone. If we lose this protection and implement a graduated tax, this protection is lost and you can be sure it will divide people.

“The simple fact is that there are not enough ‘wealthy’ people in Illinois to pay the bills for all the overspending over the years. This fact has been pointed out by independent research and that means, despite all the claims, that increased rates are going to make their way down to middle and working class families. Just look at our neighboring states with graduated income tax rates for the evidence of how high rates can go. Not to mention, we only need to look at 2011 and 2017 for all the evidence we need to see that the issue we face is a spending problem.”

Weber concluded, “Until Illinois government acknowledges its spending problem, no new tax will solve the state’s financial problems. Illinois taxpayers deserve some security against the fear of constant tax increases, so let’s give them that security in the form of HJRCA 34.”