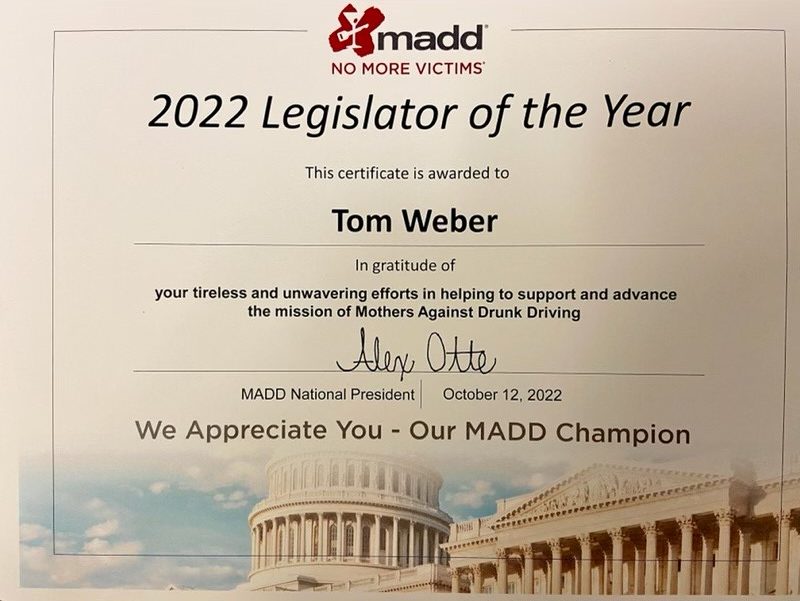 State Representative Tom Weber (R-Lake Villa) is pleased to announce his recent naming by Mothers Against Drunk Driving (MADD) as a 2022 Legislator of the Year. This honor is given to state lawmakers who played a major role in MADD’s “mission to eliminate alcohol- and drug-impaired driving and support the victims of these 100% preventable crimes”.

This year MADD recognized 65 state lawmakers from 23 states for their commitment to saving lives and preventing injuries. Rep Weber was the only Illinois House legislator to be recognized.

“Getting behind the wheel is a choice and a privilege that should not be taken lightly. It’s an honor to be recognized by an organization like MADD for my efforts to reduce preventable vehicular crashes and deaths,” Rep. Weber said. “I urge all drivers to think twice about the actions they take behind the wheel; don’t drive impaired or distracted. Your life and the lives of those around you is at stake.”

This spring, Rep. Weber passed legislation to amend state laws and pamphlets to replace the word “accident” with “crash”, reflecting the nature of vehicular incidents more accurately. In addition, Rep Weber has worked with counterparts in the Wisconsin legislature in the hopes of having them join the the Driver License Compact (DLC), an interstate agreement that enables member states to share certain information about serious driving violations of out-of-state drivers with that driver’s home state, or otherwise pass legislation to improve communication between our states to keep dangerous drivers off the road.

Despite significantly less people on the road during 2020 and 2021, fatal crashes increased 16% and 29% respectively, killing a total of 2537 in Illinois. According to the National Highway Traffic Safety Administration, drunk driving deaths increased by 13% from 2019 to 2020 and preliminary estimates for 2021 indicate another increase in drunk driving deaths nationally. Vehicle crash deaths are at a sixteen year high, increasing over 10% in the U.S.